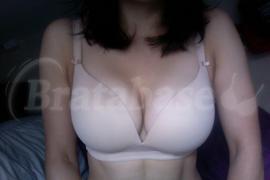 I think this bra is the bee's knees in concept; I just wish it were a little nicer. For a wireless, the shape, support, and cleavage are fantastic. I love the plain, almost-androgynous look of the bra, if that makes sense. I wish I had tried the 28G for comparison: if I tighten the straps too much, there is minimal quadboob on my larger side, but it's not noticeable under clothing and it does help the cleavage, doesn't it? Because it's wireless, the weight of your breasts does tend to create a fold in the bottom of the cup, but I don't think that can be helped; similarly, the gore will not touch your sternum, but it can't.

The main issue I've had with the bra is that the inside seams get terribly itchy and uncomfortable if the bra is worn for more than a few hours. I'm hoping it'll improve with time, but for right now I only wear the bra when I'm lounging around the house or when I'm going out-out and need epic cleavage.

I appreciate that the band is much firmer than the regular plunge Deco, which I've tried in charcoal and black. It's more of a true 28.

Edit: I sent this bra back to Bravissimo to have the inside seams investigated for a fault. Apparently they were abnormal, so I've just received a replacement. It's certainly more comfortable, but not the godsend I was hoping for. This is such a disappointment to me because I love the bra's look, shape, and support. Hopefully it'll improve once it's been washed a few times....