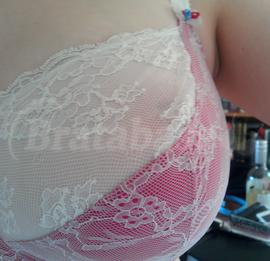 I'm about a 30KK and tried this as I remembered it being big in the cups, but I found this to be too small for me. The cups are very deep, but very closed on top, resulting in an extremely pointy, projected shape but with a lot of overspill. Despite having too much upper fullness for this bra, I also have slight wrinkling along the apex, which is a bit. I would think this bra may be more successful on those who are more bottom heavy. I found it to be quite east-west, and I didn’t seem to be able to get a very uplifted shape however much I tightened the straps. I found the wires to be quite wide (Brav wires tend to stretch easily), and the gore fairly standard for Bravissimo (narrow but tall). I found the gore to dig in a bit, I think due to the height and my close-set breasts. The band seemed like a true to size 30, and the bra sports the usual 3 hooks and fully adjustable straps. As with most bras, I found the straps to be slightly too wide set for my frame, but they seemed fairly standard for Bravissimo. The sides were a reasonable height too, though I would have preferred lower.

As I mentioned in my last post, I've recently gone up to around a 30K/KK. I have been getting by in Cleo bras, but I've also tried quite a few bras over the past few months. None of the bras ...

Center gore comfort:
Underwires dig into sternum, because they are too high
Strap separation:
Not a problem
Top of the cup:
Cuts into breast tissue (quad boob effect)