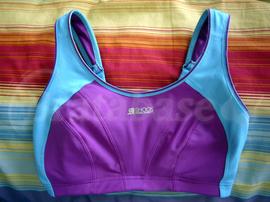 I bought the 30F used. The previous owner had altered the straps to be shorter because she was 5'2". I thought it might work since I am also 5'2". Alas, it's not perfect...

First of all, I think I should've gone with a 28 band. I only went with the 30 because I heard the 28 bands are really tight. Perhaps the previous owner broke in the bra? The band isn't terribly loose, but I think given that it's a sports bra, it could be a little more snug.

Secondly, the quadboob! Seeing as I wear somewhere between 28E and 28Fs, I certainly didn't expect the 30F to give me quadboob. I think I'd have to try a 30FF or 28G. Of course, it could be that the previous owner altered the straps so much that they are really tight on the loosest setting.

Despite the band and cup issues, I still think this is far better than my Target sports bras.