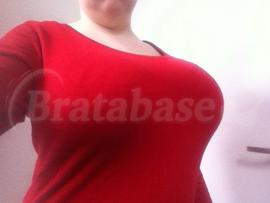 I'm loving it, it's such a pretty bra.
And the band is properly tight! I can *just* close it without using an extender, but I prefer one or two extra rows for the first wears until the band has stretched a bit.

The main issue I have with this bra (and the 70M one) is that the gore is painful. This is most likely (from what I know now) a combination of my sternum not being used to gores that tack on the underside plus the weight of the boobs. The PL doesn't lift much in the center, something that it appears I do need in a bra.
Cups seem to be alright, but when I push the gore flat they quadraboob just a little. So they're actually too small.
*edit on this october 2013* I've discovered the source of the pain. I need to wear the bras 1 hook larger. When I do this, the bra does not pain me at all. Yay!

Center gore comfort:
Underwires dig into sternum, because they are too low
Center gore placement:
Doesn't lie flat against sternum
Strap separation:
Are too far apart
Band fit:
I can fasten it, but it feels too tight
Cup's width:
Outer cup cuts into breast tissue in the sides