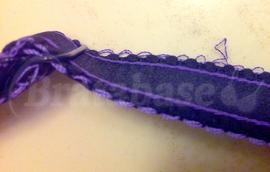 The Freya Lyla: what a pretty bra! I felt elegant when I first put it on. I have mixed feelings about the Lyla, though, but it's mostly due to my breast shape.

When the Lyla first arrived from Figleaves, I looked at it and was extremely skeptical. I wondered if I had made a huge mistake, because the cups looked taller and deeper than other 30FFs I've tried. I even looked at the label to make sure it was the right size! I also wondered just how supportive it would be, since it's all mesh.

But I was mildly surprised at the fit. I'm not going to sit here and say it actually fit me, it just fits me better than I expected. The Lyla is the narrowest bra with the deepest cups that I've tried in a 30FF. When I compare it to other unpadded/unlined cups I've tried, I like this fit better than certain Wacoals and Chantelles that, while they held my boobs in, they didn't do any favors for the shallow shape or bring them front and center. I feel like the Lyla attempts to reign in my wide set boobs and bring them on in to the front. What seems to helps with this is the way the fabric is cut at the sides, but I'm no expert with bra mechanics. It could also be the length of the wire. But that part of the bra seems to cradle the sides and nudge them forward. I'm not sure about the shape it gives my boobs. It actually seems to be a natural shape, not flattened, but the shape doesn't seem to be very lifted. I suspect it is due to my breasts being bottom heavy. While I question whether I LOOK supported in the Lyla, I certainly FEEL supported.

The band is firmer than other Freyas I have in a 30FF -- which is good, because it means I don't have to use the innermost hooks right away. I'm using the middle set of hooks, but before you say that I should try this in a 28, I suspect a 28 in this model would strangle me! In addition, I think if I went up a cup size (because the sides ARE spilling out a bit), I probably wouldn't be able to fill out the top.

Appearance-wise, as I mentioned before, it is very pretty. I was afraid that the mesh would itch, because the fabric felt a little rough when I first touched it, but it seems okay. It may be because I haven't washed it yet. I love the mesh style, and the embroidery is a nice touch. The sides of the bra peek through if I'm wearing something sleeveless with loose armholes, but for some reason, I'm fine with that.

In conclusion: the Lyla is a lovely bra if you are looking for an unpadded bra that isn't full coverage. It may not be the best match for you if you are wide set or have a wide root, or if you are bottom heavy, because the cups are quite narrow and deep.

I'm still putting the Lyla to the comfort test -- I'm wearing it right now https://d28qt14g3opchh.cloudfront.net/smileys/icon_smile.gif" alt=":)" /> so if I have any additional thoughts, I'll update this review!

Strap separation:
Not a problem
Cup's width:
Outer cup cuts into breast tissue in the sides