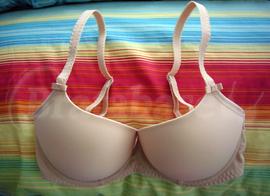 The Deco Moulded Half Cup is a pretty good bra for my shallow, wide-rooted boobs. There is some push-up padding in the bottom half of the bra. The band is looser than many other 28 bands that I've tried, but it fits pretty comfortably. Thankfully, unlike the Deco Plunge that I've tried before, the cups don't seem to run as large. This bra looks good under clothing; it gives me a rounded shape.