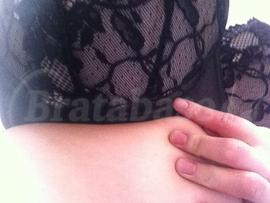 This 70L band is SUPER tight (probably extra felt because I'm forced to still wear my old 75 band bras). I felt a little light-headed after trying the bra on for a couple minutes so I took it off and grabbed my extender. I'm comfortably wearing the bra now with 2 rows added. Hearing about the stretchiness of EM bras I think this is a good thing, it'll stretch sometime soon and I'll be able to get the most out of this bra with the 4(!) rows in itself.

The cups... are awesome. They feel like they are a bit narrow for me, but it also feels like it's a good fit in width especially when I scoop&swoop. This may also be because I am still kind of used to my old super-too-small bras that are also too narrow.
There seems to be a hint of gaping at my smaller boob, especially when I pitch my shoulders forward. This might be because the cups are moulded and keep their shape, I guess. Not sure because I have never worn moulded before. I guess this bra will foce me to sit up straight properly and not hunched over https://d28qt14g3opchh.cloudfront.net/smileys/icon_smile.gif" alt=":)" />

The center gore is still not on my skin, though when I sweep my boobs to the sides the gore lies flat. But as soon as I let go they flow back to their usual position (against each other) and force the gore just a bit outward. My roots do seem to touch each other so I guess they are just too close-set for a gore to ever lie flat.
When I do push the gore flat, the gaping disappears.

After wearing it for a few hours at the end of the day (day it arrived), my rib cage hurt near the middle, about where the center gore ends on the sides. The band also curls up on the underside of my boobs, so there's probably a connection there.

Center gore placement:
Doesn't lie flat against sternum
Underwire length:
Is too short on the side, boobs escape
Cups separation:
Too separate for my boobs
Band fit:
I can fasten it, but it feels too tight
Cup's width:
Outer cup cuts into breast tissue in the sides
Strap separation:
Not a problem