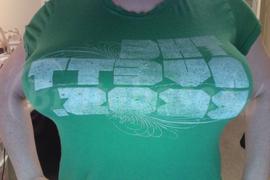 So really, I'm only entering this bra because of the complete hilarity of it. Look at the shape! WHAT??

It takes quite a bit of maneuvering to get the boobs into this bra. The cups are so elongated that at first there is about a ping-pong ball's worth of empty space at the ends of them. But if I lean forward and jiggle a bit, magically my boobs reach all the way to the ends! It is seriously the most bizarre thing ever. You can kind of see in the pictures that there is a sort of shelf under the lace that goes midway up. That gives the upwards projection you can see in the side shots. But then it ends right around the tips, so if you grab your boobs from the front, there is like a squishy ball of boob and then a tank bra. I can hardly describe it. So weird. So hilarious. My boyfriend HATES this bra. But I kind of like it. It's like modern art or something. I'm pretty sure I need to install lazors to fire out of the tips.

As for comfort, the band is very snug (presumably to make up for the lack of underwire), and the bra itself is relatively comfortable for wearing around the apartment. I tried to sleep in it, though, and woke up with crazy back pain, although I have no idea what the reason for that would be.

The construction is extremely sturdy... and... Well, really, you probably just shouldn't get this bra unless you have a specific reason to, so I'm going to stop there. Heh. Complete insanity.

Strap separation:
Not a problem
Top of the cup:
Wrinkles, can't quite fill it
Cups separation:
Too separate for my boobs