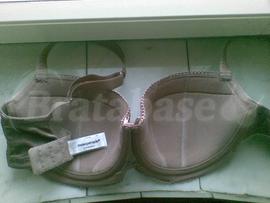 This review is for the Masquerade Rhea size 28F in the colour Antique.

A luxurious-looking bra out of matt satin and intricate detailed lace in a beautiful but difficult to describe colour. None of the images I've seen online does it justice. It's a kind of delicate greyish pinkish sandish slightly-darker-than-nude hue -- a light rose or mauve taupe comes to mind. Anyway, even though it's definitely not nude, it's an excellent and definitely more romantic alternative for a neutral-coloured bra, which is exactly what I was looking for. The centre gore is adorned with a bow and a tiny sparkly pendant. As said, the lace is intricate and expensive-looking. It's not entirely flat so it might show slightly under tight, thin, clingy clothes. The zigzag stitched seams are much less noticeable in real life than online images suggest although, again, they might show under tight, clingy clothes. The cups are only thinly padded, but the material feels quite sturdy, almost stiff. They are lined with soft and comfortable cotton. Straps are only partly adjustable. The non-adjustable part is completely non-stetchy and covered with the same satin the cups are made of, which feels quite comfortable. The wings are made out of two layers of a perfectly matching stretch satin. There is no boning in the wings.

I must say, I am impressed. First of all, it kind of sort of fits!!! Secondly, this bra gives me the kind of shape I was expecting from Ewa Michalak's CHP, but that one didn't work for me AT ALL. The cup shaping keeps the breasts close to the chest, pushing them upwards for an uplifted, separated, and rounded 'Regency'-type cleavage. Compared to my Ewa Michalak CH there is a lot less projection and I first thought my breasts looked slightly flattened and almost 'minimised', (*) but it's actually really not a bad look bad at all. I do like the shape a lot: it's simply a bit more subtle than the shape I get in my CH and a bit more wearable for that reason as well. I know others consider this a look for 'special occasions', but I'm also happy with for a more everyday appearance. The cup height is quite perfect on me and there's only the slightest of gapping when I move my arms and shoulders. The only real gripe I have with the cups is the slight irregularity at the bottom of the front most cup seam: for some reason there is a bit of diagonal pull in the cups that makes this part pucker. I'm very tempted to slip in a thin piece of boning to straighten it out as it's just such a shame in such an otherwise beautiful bra. (**)

Technically, the wires are probably slightly too wide for me (judging by the marks they leave on my skin; it really isn't noticeable as such while wearing the bra), but not uncomfortably so. I actually think I prefer them this way, at least as long as I'm still breastfeeding. Unlike the Curvy Kate Tease Me I tried several weeks ago I do not notice the wires in this Rhea at all: no poking or pinching anywhere. The centre gore lies nice and flat and exerts zero pressure on my sternum. The tight band stretches the wires somewhat (hence maybe also the diagonal pull in the cups?), but they do not seem to distort significantly and the bottom of the cups isn't noticeably flattened. My breasts fill out the bottom of the cups reasonably well and the cups do not slip down like they did in the Tease Me and the CHP I tried.

The strap placement is a bit too wide for optimum comfort, but it *just* works. The slight gapping of the cups when I move my arms is mostly due to the wide strap placement. The fact the straps are only partly adjustable is a bigger problem: as I have a very short upper torso I have to tighten them almost all the way to prevent them slipping off my shoulders.The material of the non adjustable part feels sturdy and comfortable. The zigzag stitching isn't the most aesthetically pleasing, but it doesn't bother as much as I thought it would.

The band is really a tad too snug for a 28 band, but it does work for me. I'd say it's about as tight the band on my 65E PL Onyks if not slightly tighter and it really is every bit as tight as I can take. I wouldn't want it any tighter, but one band size up will almost certainly be too loose. (***) I measure 69cm/27" underbust -- someone who measures in as a solid 28 I'd strongly advise sizing up. The band is shaped slightly funny in that it seems the wings to curve up rather than down. This makes it feel as if the band rides up in the back, even though it really doesn't. Simply takes some getting used to, I suppose. Apart from the fact I wouldn't have minded a cm or two more room, my only real issue with the band is the lack of side seam boning and/or the lack of a powernet lining in the wings: the tightness of the band of course doesn't help, but -- I think at least partly due to the fact that the satin the wings are made off is so much stretchier than the edging elastic -- the band wrinkles and causes slight discomfort. Side seam boning and a sturdier powernet lining would allow a more even distribution of the band tension along the entire height of the wings (not just along the elastic edges) and would almost certainly result in more comfort.

The Masquerade Rhea truly is an Almost Perfect Bra for me. I don't think the shape it gives is as glorious as what Ewa Michalak achieves -- I do prefer the slightly more projected shape I get from my HM Gold -- and I do have some issues with the fit and construction, but really, despite its minor imperfections it is an amazing piece! Anyway, I'm now sorely tempted to get it in all colours available plus, of course the matching knickers https://d28qt14g3opchh.cloudfront.net/smileys/icon_wink.gif" alt=";)" />

I tried this bra with an extender and I must admit it fits much more comfortably that way. Of course, with the worst of the strain off the band and the wires it shows the cups are actually too big: they do gap quite a bit. I'm going to try this bra in a band size up and a cup size down, ergo in 30DD -- I'm thinking I should get a pretty decent fit in that size.

Edited to Add, The Sequel:

So, I was taking some photo's today to list this bra for sale as I had concluded previously it fits me too tightly in the band. I had even gone so far to order a band size up ... but before proceeding with the listing I decided to try it on once more as I'm having a Difficult Boob Day and my (only) other fitting bra doesn't fit comfortably at all. 'Lo and behold, miss Rhea fits me so well today, it's as if it's a different bra. I don't even notice the snugness -- what's up with that?! So, here I am, editing this review AGAIN and quite probably deciding to keeping this bra after all. I now have a 28E on the way as well to try when I'm feeling 'smaller'. Heck, why not order a set in black too?! https://d28qt14g3opchh.cloudfront.net/smileys/icon_wink.gif" alt=";)" />

(*) (**) After trying this bra in a 30 band as well, I have a strong suspicion that both the flattened shape and the puckering in the bottom of the cups are the result of diagonal tension in the cup caused by a 'too tight' band. Don't ask me why -- I'm almost thinking it is actually a design or construction flaw that has to do with fabric grain or something. It is also slightly funny, because the 28 band certainly doesn't FEEL too tight on my 69 ribcage (it feels tight, but not TOO tight) and the wires don't really seem as distorted as I've seen them in other bras with much looser bands (Bravissimo Mademoiselle ... ?).

(***) Surprisingly, a band size up seem to work just fine. The band is not very stretchy to begin with and I haven't notice the 30 riding up on me at all. At 27" I'm obviously just in between band sizes so maybe that's why it works for me, but for what it's worth, if you experience a flattened shape and/or pucker in the bottom of the cup, try going up a band size. I myself definitely got a better shape that way.

The Masquerade Rhea is a mysterious bra. I've now tried it on in four different sizes and for some odd reason they all seem to fit. My breast size and density fluctuates (due to breastfeeding), but even though there may be as much a three cups sizes difference between my 'smallest' and my 'biggest' shape, these changes are not very clearly reflected in my actual measurements. Believe me, I quadruple checked! True, these four bras may not all fit the same at the same moment, but for Bratabase recommendation purposes I cannot say of any one of them that it doesn't fit under the current measurements at all. For what it's worth though, I have decided I get a better shape in a 30 band, so this one is probably going to be listed soon ...