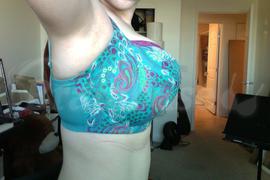 Overall, I really love this bra, although I had to make some modifications to get there. I'm a 28, but since this doesn't come in 28JJ or K, I had to make do with a 30J (like pretty much everyone, I sized down on this bra, as the cups run large). So I've had to have the band taken in, but that's pretty par for the course for me. The other big thing is that the straps are too long and stretched quickly into being way too long. I had them taken in, but they didn't take in enough so I will have to have them taken in further. Something that I really don't like about this bra is that the adjuster tightens by moving away from the solid part of the band, so you can't cheat and push it up past the elastic, and most of the band is the solid, non-adjustable part. Anyway, /endrant. With the back in and with the straps short enough (I have been using a bra barrette, but it's uncomfortable), the bra is great.

The shape is gorgeous. I really like a round, projected, out-front look, and this delivers. It's not a plunge, but it has low enough coverage that I can wear it with most necklines, and I have gotten compliments from my lady friends about how it looks under several outfits. The wires are somewhat wider than I would like, but more narrow than most I've seen, so that is nice. I still get some poking, unfortunately. The quality seems very high, and I have worn it quite a few times now without any sign of wear on the bra itself. I could use a little more padding on the wires, but I'm not getting any significant discomfort.

I really wish they would make this bra in some basic colors (nude, black, white), as the color and print make it a limited wear bra for me, which is unfortunate, as the shape is great.

Conclusion: adjustments and all aside, I would definitely recommend this bra.

Strap separation:
Are too far apart
Straps adjustment:
Straps don't adjust short enough
Band fit:
The back of the bra is not at the same level as the front (rides up)