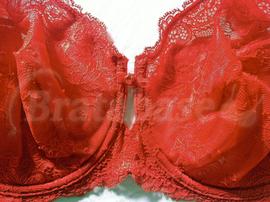 To be honest, I didn't think I would like this bra much because it looked like a whole mess of scratchy lace, hanging there on the bra rack. But I was determined to give any bra within my size range a chance, just out of curiosity.
Well, the Seduction bra certainly surprised me, because I was pretty sure it wouldn't even come close to fitting me. But I put it on, scooped and swooped, and there were my boobs, firmly supported, ta da. Although a tiny bit pointier than I'm used to.

What I liked about this bra: the band, mostly! The wing is longer than most of my other bras (except for a couple of longlines I have) and I really like that it comes up on my sides. There is also boning on the sides, for extra support, I assume. The underwires are pretty long, so they go right up to my armpits, collecting the tissue there, but without gouging out my armpits. In general, my breasts just feel really firm wearing this model.

What I don't like about this bra: the material could be softer. It might soften up after I wash it, though (I haven't worn it enough yet). It's definitely not designed for v-necks, as it lifts and separates more than brings your boobs to the front. And there's the aforementioned pointy factor. I'm wearing this on the middle hook, and it's only been the third wearing - but it could be due to me losing a half inch around my underbust recently. The 32 band is tighter than some other 32 bands I've tried, so you might want to keep that in mind if you're in between sizes.

I admit I've been unfair to Wacoal in the best, only because I encountered what were I thought horrendously narrow 34Bs and 32Ds, not realizing I was simply wearing the wrong dang size :/

[ETA]: Another one for the quadboob collection, sigh.