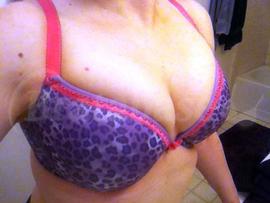 All I have to say is "wow, no" https://d28qt14g3opchh.cloudfront.net/smileys/icon_sad.gif" alt=":(" /> I mean this bra? Was so close and yet SO FAR. I pretty much tried the Cleo Jude for shits and giggles because I've seen at least one review where they stated that lol the Jude rarely works for anyone. But I'm like, it doesn't hurt to try, am I right?
So. Scooting this bra on, the first thing I noticed is the way the tops of the bra cups cut in to the boobs. And this is before I scooped and swooped, even. Doing that led to the quadboobilicious effect you'll see in my photo. But? How is it that while the top of this bra is cutting into me, the bottoms of the cups are all sorts of wrinkling? I can only conclude that nope, these molded cups DO NOT work with the shape of my boobies.
Which is a shame, because you know what works? The underwires go all the way up my sides, in such a matter that it reigns in my sideboobal areas without causing me discomfort. So I have to ask WHY. Why have the top of the cups cut in like that? If it wasn't for that, I'm pretty sure I could wrangle my breasts into this. I even started thinking "Well WHAT IF I removed the part of the bra that cut into my boobs? Would shit then be awesome??"
Of course, this makes me curious. Are there Cleo bras that have the awesome sideboob containing abilities WITHOUT the awful tightening that occurs at the top of the breasts?? Because THAT would be the bra for me and my wide ass set boobs. Just saying.
To make matters worse, this bra is actually somewhat comfortable, but what with the wonky shape, just. No. https://d28qt14g3opchh.cloudfront.net/smileys/icon_sad.gif" alt=":(" />

Strap separation:
Not a problem
Bottom of the cup:
Can't quite fill it
Top of the cup:
Cuts into breast tissue (quad boob effect)