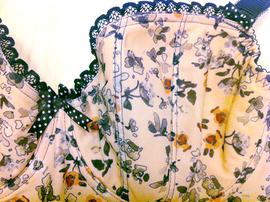 I love the way this bra makes my breasts look. However, I think it may be too small in the cups as some breast tissue spills over under the arms after I move for a period of time in it. I first tried on a 30G and could barely fasten it because the band was too tight, so I decided to try what I thought was a 32F on instead. I could fasten this bra, and it was a snug fit. I was on the fence about the sideboob thing, but I really liked the way my breasts looked, I admit. My breasts are bottom-heavy, and this makes them look fuller on top. I decided to go for it anyway, the bra was on sale for like $30 at Nordstrom Rack.
Later, when I decided to enter the measurements into the Bratabase, I noticed the actual tag in the bra -- not the price tag -- actually said 30F! Which makes no sense to me, because the 30G, which I would think would be a bit looser because of the cups, I couldn't fit into. Plus, from what I've read, this model runs snugger than some of the other Freya models. That makes sense to me, because in other Freya models I've tried, a 30 band usually works out pretty good for me. So I don't know really if this is a 30F or a 32F, but I've put 30F in the bratabase, since that what it says on the tag. Maybe I got an off-model bra lol :/
I'd really like to try out this model in a 30FF and a 32FF just to compare.

Strap separation:
Not a problem
Cup's width:
Outer cup cuts into breast tissue in the sides