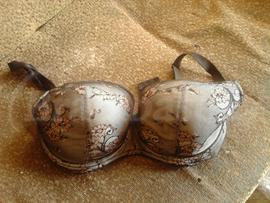 I truly believe it's one of the most beautiful bras I've ever seen: the dark mesh with floral embroidery looks amazing on beige fabric. It's even better because both the cups and the band have exactly the same embroidery on it, so it looks just as beautiful in frontal and back view.
But it's not only beautiful, it's really comfy too. The padding is rather thin and soft on the inside and there's nothing that could dig into body or leave some marks. The band is really, really tight, if you want to buy it, you should go for a band at least one size bigger than you usually wear, but if you get the right fit, it doesn't dig into your body, it doesn't ride up, down or in whatever direction it could, it just stays around and keeps the bra in place: in front of your chest. I love the uplift it gives: it's not like wearing Ewa Michalak's bras with the feeling of having my boobs right below my chin, but still it makes the cleavage really noticeable. The bra also gives nice, round shape without the feeling of having my boobs shaped against their natural look (I mean sometimes the bra adjusts to body but sometimes the bra forms the breast tissue if it's soft enough, and if it isn't, the fit is horrible; so here's the first case)
The straps are the only flaw: they are only pieces of dark, elastic fabric. The edges of the straps can dig into body sometimes. But there's no other flaw I can think of. After a week of wearing and two long train rides I can say I totally love it.