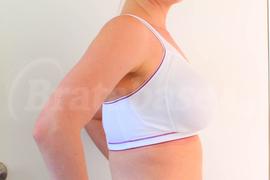 I don't understand why this bra exists. At all.

I'd read reviews from others who have complained about the back of the bra and how annoying it in to get and out of but I have to admit my first reaction to trying on this bra was to turn it over and think:

REALLY? Are you kidding me?

The back isn't really firm where the hooks are - it's tight as all hell across the racerback meeting point that you can't open up! ARGH

After squishing my boobs down to my chest, wriggling into this and then scooping my sore boobs into place I was really hoping the bra would redeem itself.

The bra really cuts in around my underarms and across my back and kind of presses down tight high on my chest. But the bra doesn't actually supports my breasts at all. I wouldn't even want to jump up and down once wearing it.

How is it possible that it's tight in all the places I don't need support and useless where I need it? Lifting and supporting my boobs?!

I don't get this bra and why it wasn't axed by Freya.

They have an underwired Active bra. Lots of people love it (shape doesn't work for me, but that's cool). They also have a soft cup Active bra which I've tried in both 30G and 30FF and the 30FF was a better fit (the first and only Freya bra that I've needed smaller than a 30G so far).

I think I'd need the 30FF in this too. There's way too much room on the side of the "cups" and maybe in a 30FF I'd feel a bit of boob-support. Maybe.

The fit and feel of the soft cup sports bra is identical to this one. The shape this moulded bra gave me reminded me of it exactly and I find that the soft cup bra pushes down on my upper chest a bit too. Like this one.

But the soft cup sports bra felt a bit more supportive than this. I still wouldn't use either for jogging, but for a brisk walk/hiking/cycling I'd wear the soft cup from Freya Active.

There's no need to try this bra. Move on and save yourself the hassle!