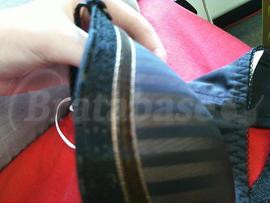 When I first tried out 28D bras, I started with the Freya Deco half cup. That really did not fit, so I sent it back and shied away from bras for a while, thinking I was somehow too small for my sister size in a smaller band. Later, I learned that the Deco tends to run large in the cup, by almost a full cup size, but that certain models - Taylor, Carly, etc., - came closer to normal. I love molded cup bras, so I decided to give the Taylor a go.

Well, the cups are smaller. I'll give it that. The band is still somewhat large for a 28, as expected of Freya. The pattern is pretty, the bra is classy - it's certainly not the best quality thing I've ever owned, but I've learned not to expect much compared to my 32B days. I do find the strip of brown velvet kind of tacky, but it's really not a big deal.

My actual complaint should be well illustrated in the pictures. The edge of the bra's cups pull away! It's absurd, really, because the cup fits perfectly until that last centimeter. After the velvet ends, there's a lace edging on the cup, and at this point, the molded cup actually bends away from my body. With the bra off, you can see (or I hope you can, sorry for the webcam pictures!) that this is just how the bra was constructed. I'm not sure how to handle this. No amount of adjusting the straps or back or swooping and scooping can change the fact that the cup just is not shaped like a boob. I mean, the top of the cups is a bit too deep for my small boobs, but that's nothing compared to the awkwardness of my cups showing through all my shirts.

I'm just... disappointed, really. My experience with Freya made me expect that the cups would be deep at the top and the band would be bigger. I can live with both of those, because the band just wears a little faster, and the cup thing only bothers me when I lay down. But this bra is now firmly relegated to housewear due to its construction. I would definitely not buy again.

Strap separation:
Not a problem
Top of the cup:
Wrinkles, can't quite fill it