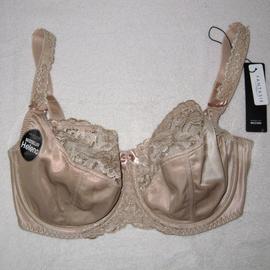 I wish the fabric and lace on the cups was a bit stiffer. It's a bit more flimsy/flexible than what I'm used to (compared to the slightly stiffer fabric of a Panache Tango Ii). The result of this is that I feel a tiny bit of potential for bounce when walking. (Not extreme, just slight.) When preforming the test of slipping the straps off the shoulders to test the support of the cups, I found that the cups drooped a bit more than other bras I have tried this with.

The band is comfortable, I have no problems with the underwires at all. The center gore tacks nicely on my sternum. There is a smidge of gapping at the top of the lace (particularly on my smaller side), but with a shirt it gets flattened down and is not noticeable at all. I don't believe the lace would show through most shirts, it would probably only be an issue on extremely thin fabrics. Keep in mind this is a seamed bra without lining or padding, so it wouldn't be my number one choice to wear with thin t-shirts anyway. (The seams DO show through t-shirts, as I tested this.)

The straps attach to the cups extremely far on the side, which makes the side of the cup and strap cut into my armpit a bit. (I have narrow rounded shoulders and often have issues with wide-set straps, so I'm sure this is probably more of an incompatibly with my shape rather than a flaw with the bra.) The wide-set straps also puts strain on my shoulders, as they sit so far out to the sides. (Yes, I know the band is tight enough, and I do not have the straps too tight. I just have shoulder issues.) A strap holder on my back fixes the issue with the wide-set straps, bringing them in to a more natural spot on my shoulders and reducing shoulder strain.

Profile view from the side shows a fairly rounded shape. While it's not *quite* as rounded as I like, it's no where near being called pointy! (In comparison to the Panache Tango Ii, this is quite a bit more rounded than the shape the Tango gives, at least for me.) View from the front isn't *quite* as front and center as I'd like, but honestly it's very good.

I do believe the bra fits, but for now I have decided to return it. If I find a great deal on it in the future, I will probably pick one up, but I'm not ready to pay full price due to the little issues I have with it.