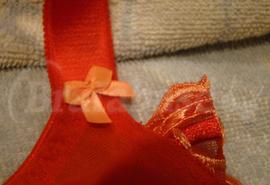 The band runs loose. I have another Freya bra in the same size, which fits very well, but with this one, I had to start using the second set of hooks immediately (I should have gone for a smaller band, but I was still enthusiastic from my First Fitting and allowed myself to be talked into buying this one. My bad.)

The material used is a sheer mesh, which doesn't stretch much. I thought it would scratch, but it's in fact very comfortable... and I really like the way it looks.I love the detailing, and even though I'm not a big fan of pink hues, the subtle red/salmon color of this bra is wonderful.

The straps are rather slippery - not that they would fall off shoulders (although I'm quite broad-shouldered, so I rarely have this problem), but sometimes, when I'm taking off the bra or putting it on, the metal thingummy slides up or down from it's own volition, which is rather annoying. I've never had to re-adjust the bra during the day, though, it really only happens when it's not taut.

As for the shape from the side, see the photo. I was rather unhappy with it at first, because I felt too "pointy" but I've grown onto it.

P.S. I've found a wonderful use for this bra - I wear it for my singing lessons https://d28qt14g3opchh.cloudfront.net/smileys/icon_smile.gif" alt=":)" /> My ribcage expands temporarily during breathing exercises and wearing some of the snugger bands was rather uncomfortable. The Arabella is ideal.

Strap separation:
Not a problem
Top of the cup:
Cuts into breast tissue (quad boob effect)
Band fit:
The band is definitely too big