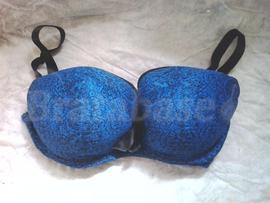 The royal blue bra with black pattern was one of my must-haves for this season, so I got it as soon as possible. And I'm almost as much in love as I thought I'd be.
What should be noticed and reminded again and again - the band is just as tight as the last season Comexim plunges, so sizing down is definitely not a good idea. It works rather well though and stays in place just as it should. If you have established your Comexim size - go for it, there's no big difference. Only the cups seem less open than in the last season plunges, but this can be avoided if you order lower cut cups.
Another downside are the straps - two pieces of black elastic, the same I hated so much in the Geisha. It seems worse this time though, as they might be somewhat shorter; it doesn't bother me but might be a problem for someone taller.
I'm also not really a fan of the big bow placed on the center gore. It's too big to fit between bigger breasts and steals all the attention from the smaller ones (plus it can be visible under some clothes), so I don't really know what it's here for.