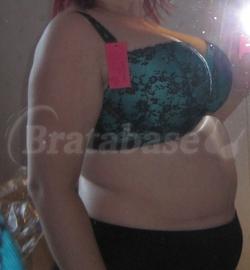 So this bra was my first trying smaller cups and it didn't end up very good as you can see. My boobs was on top of the cups instead of in it. They were on the sides instead of in it. When I leaned over and scoped hard I would instead have overspill. When I tried to just hold the cups around my boobs with my hands they were obviously too small.

The bra in itself is a very beautiful bra. It kind of looks a little like Panache Sienna, but in a blue green kind of way instead. I wish I would've fit into it but I don't think it would have been any use.

The lace didn't show under clothing. The shape wasn't quite my thing. I am not this much projected as you can see.

I made this review so that I could set up a fitting request so that everyone could see the madness of how bad it is being high on chest and having that tissue running back and forth. I don't have the bra at home any more. I have considered buying a larger size to make the wires come back and get my root and end up higher on my sides so that more tissue will sit at my chest.

Center gore placement:
Doesn't lie flat against sternum
Underwire length:
Is too short on the side, boobs escape
Top of the cup:
Wrinkles, can't quite fill it
Cups separation:
Too separate for my boobs
Band fit:
The band is definitely too big
Cup's width:
Outer cup cuts into breast tissue in the sides
Strap separation:
Are too far apart
Straps adjustment:
Straps don't adjust short enough