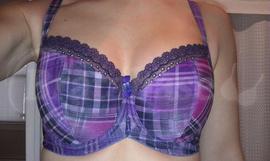 I read reviews and had purchased this bra on HerRoom.com but they cancelled my order (backordered but then they changed the stock to discontinued), so I was able to find it on BareNecessities. But the reviews I've read for this bra on HerRoom and on here indicate it ran small in the cup, which makes sense because I think most of Panache's bras do, so I ordered a cup size up from my usual and it fits perfect!! I was almost regretting it so I wouldn't have to pay for shipping, but I'm so glad I stuck with my first choice! And for a cup depth of only 9.25" this is a measurement you would normally see on a size 28F (DDDD/ and a US-G). I now know what size to order in this brand =)

-T-shirt bra, so a hell of a lot more functional than other bras from this brand and other European brands, the foam is not thick enough to add size, but enough to be modest.
-Vertical seams help create a more American-style, rounded silhouette (if they had been your traditional 3 seams this would give a pointed shape, even with a foam cup), and it also helps to direct you front and center.
-Wicked cute fabric and details!! The lace at the top of the cup is not stretchy but it is the correct size for the remainder of the bra (finally!)
-Lining on inside of cup is cotton, much more comfortable than comparable brands.

-Center gore in front sticks out a little bit, but this is because it's more for women who have a bigger stomach as it's curved up quite a bit (mine is pretty flat, tapering to 24" so there is a little shadowing/space under this area). Not really a problem, but some might consider it as the band being too big, it's not. Panache either makes partial banded bras or full bands for "thicker" frames. =/
-Straps don't adjust short enough (I did not put this down as a fit problem because for now it's fine, though I will probably have to alter the straps in the future).
-A few unfinished/raw edges inside the bra, and some sticking out on the cup. Quality could be a little bit more impressive considering the cost.
-I can close this on the middle hooks already as a brand new bra, so this doesn't run quite as small in the band as some other styles from Panache. Not a problem for me, but on others it may be.

This fit before but had some problems when it came to the shape. Before the seams in the cup would point to the sides at the bottom and to the center at the top, kind of like a forward slash, backward slash. I added a dart in the center gore, which took out about 1.125" from the band length so it's more snug, and now the seams in the cup are straight up and down. It gives better lift and support from the bottom of the cup, whereas before it would kind of just pull you down to the sides.