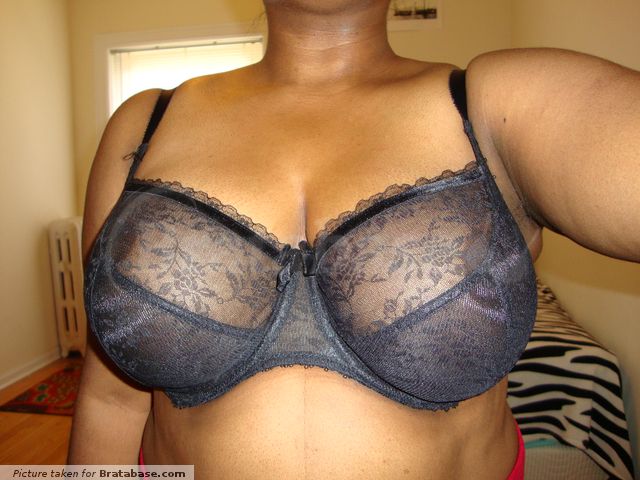 A few months ago, I won an anniversary giveaway from Invest in Your Chest. I had won a set of my choice from UK brand Miss Mandalay. Miss Mandalay bills their brand as “fashionably different”, and I had no problem finding a lingerie set that I would love. Their products come in C-HH cups, and like other leading lingerie brands they also sell swimwear. After consulting with a Miss Mandalay rep about sizing, I decided to go with a 36FF instead of my typical 34G size. I picked the Mia because I have been looking for a simple, but beautiful black lingerie set. Mia is available in sizes 30-36 DD-GG.

This bra has a classic look and shape, but the details make it stand out. The velvet detailing along the cups and the bow on the gore take what could be a basic bra up a notch. The lacy pattern also makes this bra anything but a boring basic. The fit on this bra is not 100% perfect, but it is wearable. The gore does not sit fully flush against my chest, but my breasts do stay put. The velvet fabric on the top cups do not cut into my breasts, but this could pose a problem with more full on top breasts. I do wish that there was more uplift in this bra. This bra is super lightweight, which is perfect for wearing under t-shirts and dresses this summer. The velvet detailing is barely noticeable underneath thin tops. At times while wearing this bra, it was easy to forget that I was wearing one. Petite women often have the problem of straps not adjusting short enough, but the straps of the Mia are fully adjustable. I wish that the band were a bit firmer and less stretchy. I have only worn the bra a handful of times, and I already am using the middle hook. Although it is not bothersome to me, the straps are on the thin side. Here you can see that the straps are just a bit thinner than those on the Cleo Meg. Becky’s Boudoir, Lingerie Lesbian, and Undiegamer have all reviewed the Paris bra from Miss Mandalay, which has a similar cut to Mia. Miss Mandalay’s full range of products can be ordered directly from their website and from sites like Large Cup Lingerie. In the US, Linda the Bra Lady sells Miss Mandalay swimwear and Shop Journelle will be restocking the Miss Mandalay line for the Fall season.

These measurements were taken as soon as I got the bra before wearing it, as I mentioned before the band seems to stretch quite a bit after a couple of wears.