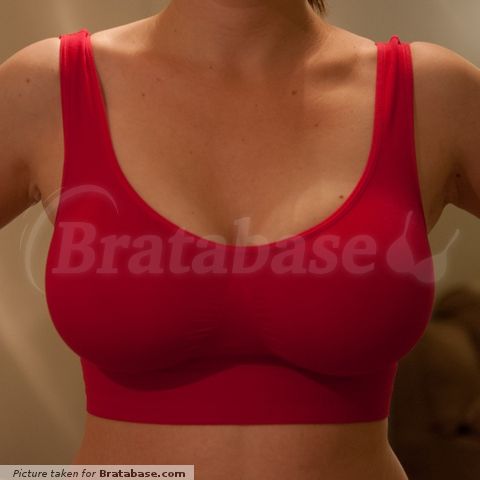 When I first heard about the Ahh Bra, I was quite doubtful about it and how it would fit and be able to support me. I usually wear something like a 28HH to 30GG, which means I need a lot of support and there is a big difference between my full bust and underbust measurements. The Ahh Bra doesn’t come in cup sizes, but just shirt sizes, which is usually a complete knock-out criterion for me. Based on my measurements and usual shirt size, I got to try four different Ahh Bra models in Small and Medium.

The basic Ahh Bra is basically one (almost) seamless piece of 93% Nylon and 7% Spandex. It doesn’t have underwires, but the band, which is about one inch wide and has some extra elastic, provides some extra stability. The ”cups” are shaped by special ribbing, which is a little less elastic than the rest of the bra. The straps are not adjustable and in most models, the band is also non-adjustable. Some models come with removable inserts for modesty, not to add volume.

The first model I tried was what appears to be their classic/basic model in a pretty raspberry color. It was a size Medium and I was positively surprised by how well it fit. The two bras I tried in the small size fit a lot worse than the mediums, so the rest of this review will focus on the medium sized ones, as these were probably the ”correct” size. The band of the medium bra pretty much stays in place and is quite wide, which helps to improve the bra’s stability. The cups actually contain my breast tissue without much spilling, but since there is no underwire, my breasts get pushed together and touch each other (which they normally don’t do and I don’t like, because I start sweating).

The lift is not bad when I sit still and my breasts get supported enough so they don’t touch my chest underneath thanks to the special ribbing I talked about earlier. When I move, there is a lot of bounce and I have to hold my breasts in place for anything more than moderate walking. It almost seems as though the Ahh Bra exacerbates the natural bouncing because of how elastic it is.

The length of the non-adjustable straps wasn’t really a problem for me, but probably could be for a lot of other women. The band on the other hand, could have been a lot tighter. In the photo, you can see that I can pull it out several inches without too much effort. Despite this fact, it stayed in place quite well due to the elastic and how wide it is.

The fit of the bras in the small size was worse. I was falling out of the cups and there was no way they could contain all my tissue. The band wasn’t really much better/tighter either, so there would be no benefit in wearing them. Overall, the look they gave me was quite obscene Ahh bras are compression-type bras, which means they squish the breast together and towards the chest to create support. Due to this fact, my shape was quite flattened. The lift was better than without any bra, but definitely worse than my usual underwired bras. As I said earlier, my breasts get pushed together by the bra, which on the one hand means that I start to sweat in that area, but on the other hand, it means that the shape is more forward and there is less tissue under my arms getting in the way when I move them. To sum it up, I quite like the basic Ahh Bra model for what it is. I wear it to lounge around the house when I’m too lazy to put on a real bra. I would not wear it outside or for any serious activity, as there is not enough support. The lack of adjustability is a definite minus, as we all know that one size does not fit all and there are many different shapes and sizes. If you’re looking for a decently comfortable wirefree bra, the Ahh bra would be a good choice, if you can figure out the size you should wear and can deal with the lack of support and adjustability, and noticeable bounce. Hourglassy and the Kelly Parks have also reviewed the Ahh Bra and come to similar conclusions. It’s a good choice for lounging, but not a serious alternative, if you need any kind of support!