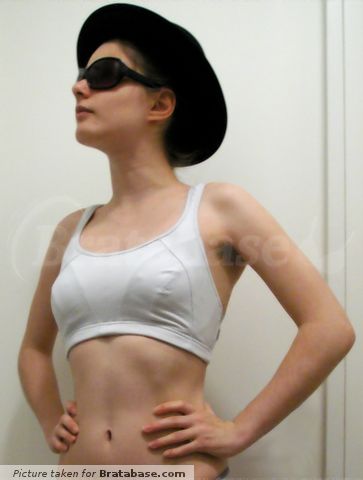 I was one of the “I hate sports” kind of women. And I did hate sports. I hated everything about it. And every kind of it. Even watching other people do it.

And since I read that sitting around might account for almost 10% of premature deaths worldwide, I suppose I'm not the only one who has that mindset.

We have developed the extraordinary luxury not to have to hunt or gather for food. We just have to get up and get something out of the fridge, which is usually less stressful and has decidedly less movement involved. Even our replacement for hunting and gathering – working – means to sit around doing nothing physical. For most of us. Which is very comfortable. At least for the first couple of decades of your life. This lifestyle felt pretty good to me and parts of it still do.

(I would never say no to having a fridge. Obviously.

So after having hated sports for a couple of years in school and leaving school and sports with it, I got into bra-fitting. I guess I don't have to tell you much about it, most of you will know what I'm talking about. Constantly looking at other women's breasts, also constantly looking at your own and so on. And in a lot of places I saw that people advised other people to get sports bras among their first fitted bras. And, well, I read it and discarded it. I never really owned a sports bra, I didn't even know such a thing existed, and I didn't do sports, so obviously I didn't need one.

And then, on one lazy evening spent looking through ebay for misnamed or unnamed bras which I could get cheaply, I found a misnamed Shock Absorber Max Sports bra B4490 in my size, which I could identify and, well, for some reason or another, I bid on it and no one else did, so it became mine. It wasn't especially pretty, but, and here comes the point of this way too long story: It got me into sports.

I tried it on and fell in love with it. It was snuggling me! (I'll spare you the details of my bra love here, let's sum it up with: It fits really well and it stops my breasts from moving in any way and I lurrrvvvv it!!! Best bra ever!!! Ok, done.

The only logical conclusion I could draw was to get into sports so this amazing fit wouldn't be lost. While today I wouldn't say that I'm “the athletic type”, I would say that I'm way healthier and feel better and have started to really enjoy sports. And all that just because of a well-fitting sports bra. I can only urge you to do the same... Just try on a sports bra! Even if you think you don't need one.

Here are some models which you could try: